Error: Twitter did not respond. Please wait a few minutes and refresh this page.

This was supposed to be a standard review of a race: thoughts on my pace, how I felt throughout, and the euphoria of running past mile signs I had never dared to dream about.

All that changed Monday afternoon when I checked my Twitter feed to see how close runners were to finishing the historic Boston Marathon.

I had been on a runner’s high myself, what with finishing my first half marathon on Sunday, and spending Monday morning cheering on Kara and Shalane through social media. The desire to get out and run overwhelmed me, even as I struggled to take every step with my tight hamstrings and sore hip flexors.

I was burning with a passion to pound the pavement, yet again, and truly test my mental and physical strength. As I saw the elite runners pass the finish line, I made an oath to myself to train harder and faster, because I knew I had the potential. I am a runner.

Fast forward a couple hours to me checking my Twitter and Facebook feed to confusion. An explosion at the marathon? Disbelief and denial coursed through me. As I saw pictures of the smoke surrounding the finish line, I knew the gut-wrenching truth: this was no mere accident. I later heard reports from runners and witnesses that the explosion sounded like a cannon going off, with it being Patriots’ Day in MA.

Although I only saw footage and read reports, I felt like it happened right outside my door. In fact, my mum even commented as soon as I reached home last night,”Thank God this didn’t happen in your race yesterday- and don’t race again.” Though I appreciated her worries, she and I both know that whatever lies ahead, I will continue to run straight towards it.

Today, as I reflect on the events, I am thankful for every minute and every mile my body endures to pursue a never-ending passion for a sport in which everyone can be defined as an athlete. My heart and my prayers are with the victims, the runners, the witnesses and all lovers of the sport of running.

I ran 13.1 miles, twice around Central Park on Sunday for the More/ Fitness Magazine Women’s Half Marathon. I checked my mile times and I ran two miles at a 9:30ish pace.

The hills didn’t scare me as I took each methodically, sometimes catching a draft from the runner ahead of me, sometimes counting my footfalls in my head. I did walk for about one and a half min. but overall I was happy with my finishing time of 2:23:17.

Yes, my ankles and hip flexors cried in pain, but I pushed through and still had a kick left to push to the finish. I ate a chocolate PowerBar at the 6 mile mark and I do believe it helped. I was most tired during miles 8 and 12. Of course, I was euphoric after mile 7 because that was the furthest I had ever run.

The downhills were amazing as the breeze cooled the sweat produced from the uphill climbs. Running alongside women was thrilling; I felt like we were all motivating each other telepathically to run up those hills together.

I wonder at the feeling of accomplishment and pride marathoners feel when they cross the finish line; if its half of what I was feeling, I hope I run one in the near future.

All in all, I had a great race, didn’t psych myself out too much with the distance, and thoroughly enjoyed the high 50 temps. )

I picked up the May 2013 issue of Runner’s World magazine last week and read an interesting article (Hurts So Good by Marc Parent) on how runners fight through pain and still pursue the sport. (I couldn’t find the article online to link it to, so here’s a picture instead). 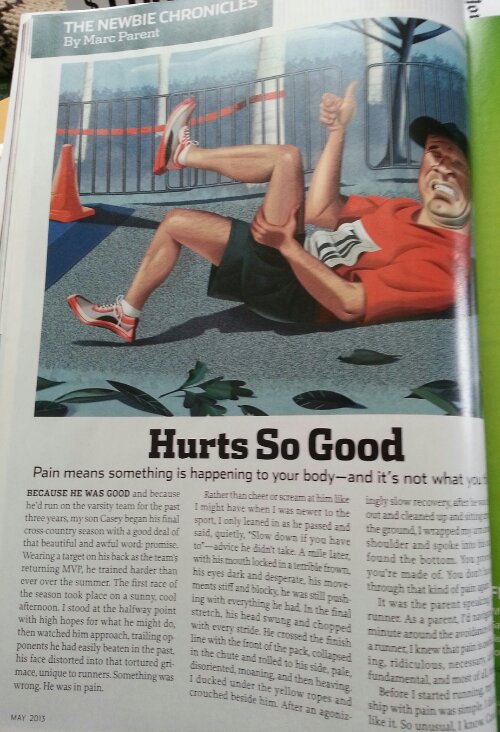 Intrigued, I asked myself if I did the same; and by golly, I do! For me running is a 99% mental 1% physical effort; and yet, I’m happy to lace up my sneakers and pound the sand, boardwalk, tar and reluctantly, pavement.

On the other hand, this rush of adrenaline and inspiration does not flow through my veins when I try to finish a barre or Figure 4 workout. I fervently abhor the numbness causing pain that courses through my glutes as I perform endless reps of first position squats along with other thigh blasting exercises.
Why can’t I motivate myself to finish one round of 20 reps when I have no problem psyching myself to run one more mile? It’s weird, but I don’t beat myself down when I can’t pulse my leg in the air for the allotted time, but you can bet I have a few choice words for myself if I resort to walking during the middle of a race!

I guess it all comes down to what a person perceives as fun. Running is fun for me, as I feel more in tune with the elements of nature around me. Performing countless exercises at first position is tedious, boring and arduous for me.

I thought all exercise pain was something I mindlessly pushed through; but there is a pain I will gladly accept and one I won’t. Though I’m certainly not ecstatic for future side pains, cramps, shin splints and tight hamstrings; I’m glad I’m a happy runner and hope to always be one 🙂

My brother wanted granola this week,  so I looked inside our shelves and put this medley together.  Why are toasted  oats way more delicious than cooked oats? 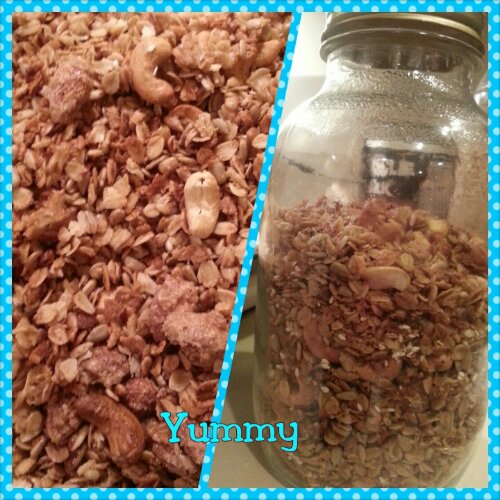 I really wanted to add some dried fruits, but he didn’t.

Instead we made cinnamon sugar almonds (almonds tossed in cinnamon, sugar and egg whites) and tossed it in after the granola had cooled down.

What a simple and delicious way to make homemade cereal. He was satisfied all week long! Cinnamon sugar can do that to a person.

I had a sleepover at my niece’s last night. We read books, made up stories about shepherd boys and kings, practiced math and snuggled together in bed.

I love my alone time with her; her zest for life cannot be beat. I look into her deep brown eyes sparkling with excitement and can’t help but fall in love over and over again.

She’s a bit picky about eating, but if I tell her it’s healthy food that will make her grow into a big girl;  she’ll snap it up in a heartbeat.

Here’s what my silly goose and I made for her dinner last night:

We had loads of fun pretending to be animals that ate vegetation; like being an elephant or a giraffe that eats trees; birds that eat parts of flowers; cows and sheep that eat grass. She giggled her way to a full stomach and for that, I was grateful.

Whenever I get a craving for something sweet,  I invariably turn to ToneItUp.com’s Peanut Butter Protein balls recipe. It’s a decadent protein packed crunch that will have your tastebuds calling for seconds and thirds.

Yet, being the chocolate lover I am, I can’t help but include some dark chocolate or cacao nibs. After a whole week of craving, I finally succumbed to the call of the late night “baking” Sirens and made my version of K&K’s recipe.  (Note: there is no actual baking involved; just some old fashioned mixing with a spoon).

I made two small batches: the main difference being the nut butters and the sesame seeds. 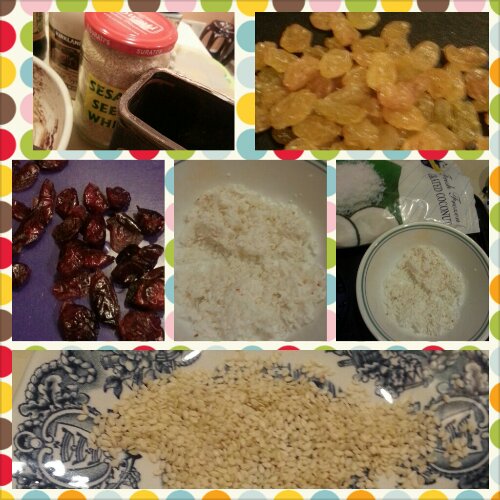 1. Mix the almond butter with the molasses and maple syrup over a burner, just until the mixture is smooth.

4. Roll each round in the white sesame seeds for a delectable coating.

Follow the recipe above except for the following substitutions:

-Swap the almond for peanut butter.

-Swap the craisins for golden raisins.

To Serve: You can eat them immediately; but I prefer them refrigerated or frozen.

Things Could Be Worse